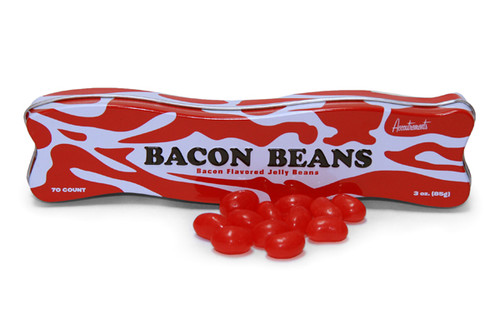 We all know the story about this kid Jack who traded his old cow for some magic beans. But what people don't know is the real story. These magic beans weren't beanstalk growing beans. The storytellers had it wrong. These magic beans were actually bacon flavored jelly beans. And during this time, bacon beans were coveted and extremely rare. Giants were not only notorious for collecting rare items, but they were also highly addicted to bacon beans. So when Jack was given these bacon jelly beans, a giant came out of nowhere (this is probably where the beanstalk comes into the story, but we're not exactly sure). This giant started stomping around and yelling, "Fee-fi-fo-fum! I smell the tasty bean of a Ba-con!" Because you see, these bacon beans were only found in the most remote parts of the world. Which is why, these beans are truly a treat to have. We had to go through a lot just to get them. Just get these bacon flavored jelly beans, don't ask us questions. Trust us, you don't want to know. These beans also make for a great bacon gag gift. Contains *3 oz.